For the second year in a row, I'm late with this announcement lol

The 27th marked our second birthday as a forum.  To celebrate, why don't we have an old fashioned PSAS tournament?  Let's all hop back on the game that started it all, get back into our grooves, and beat the

out of eachother!  The PSAS Anniversary Tourney will start in the next few weeks, after I let other Pasta family know on PSN.  If I can get Epic involved, we'll make it a Championship affair, and if we can get doubles going we'll crown our Tag Champs!

But PSAS isn't the only thing we do here, as you all know.  I don't have any videos to show you, I'll be blunt.  Every time I try I realize there are too many sprites missing to make things work well without giving you some trailer full of clip editing.  That situation is a bit tough for us, and with only a few artists who have lives of their own it always has been.  If the PSPlus effect helps our beloved brawler out, and the official forum gets traffic, I'll head over there and try to find more artists to help out.  Helv and Blade are hoping to get back into the equation on that too, so we can get something going.  As I said before, we revealed way too early our plans, and we barely left the concept phase until about April.

But I won't leave you high and dry.  I promised something by September, and Slayer wanted to do this for a while.  Here's our intended starting roster:

Any questions about our roster can go in the Axis section.  We have good explanations for each of our choices (we spent a long time debating our starting roster - I actually fought against both Ice Climbers and Toro for the first 20!)

There's one last thing I'd like to mention.  In light of recent events, the active Staff discussed the addition of another Moderator.  I brought the idea forth so that any complaints could be brought to more than one active-daily Staff member (since sometimes the other Staff are gone for a week or so).  We all ("all" being Blade, Helv, Chaos, and I, as the other two haven't been active recently) agreed on my suggested member, and I've discussed the opportunity with said member.  With this in mind, let's congratulate our newest Mod...

Now, I will note while that the decision is a majority vote of our 6 staff, the Mod position could be temporary.  However, that is only a possibility, and mostly to give the other two a chance to discuss the issue before proceeding definitively.  I picked Count because of the active members he's the most consistently on besides myself, and because he has no previous issues with any members, making him the most objective should an issue arise.  So should someone have a complaint about any staff actions, address them to him.

We're also considering reviewing the current rules and punishment layout to make sure every user has the optimal experience here.  Any changes that we make will be made public and given a week's notice for discussion amongst users.

With all this said, let's wish the forum a happy birthday!  Here's to another year of Pasta!

On a side note, if anyone on here hasn't added me yet on PSN feel free to do so since I wish to stay in contact with all of you. There's a bond here and even if we sometimes but heads we still chat with one another. Some of us may only come on once a day, week, month or not at all, but that doesn't mean I've forgotten this place.

PSN: Chaosdreams
Reason for adding me: Because we're friends.

Have a good night/morning everyone! I'll certainly be taking part in the PSAS battles that happen in the future. As for Super Smash Brothers, i'll be on that for the 3ds the moment I get my hands on it. And while I'm at it, I'll take my 3ds back from my mom who's addicted to Animal Crossing. If anyone's added me and I haven't accepted, that's why.

It seems that my plan to lurk in the shadows and gradually buy trust from the forum has succeeded. Even if this might be temporary, it is nonetheless apparent that I am closer than ever to gaining the power to dominate this forum. Every day has been building up to this, and I regret not a single moment of cunning, deception, and patience. Finally… I am a moderator!

Or, excusing my pretentious inauguration soliloquy, thank you everyone (even if it's four people, with two others not he same footing missing lol) for selecting me for this position. Even if it's just for a while, I'll commit myself and do you all proud! Or just go mad with power, but either way, you have my gratitude for thinking of me this highly.

Moving on, thank you. No, not for the mod position, but thank you, the moderators and administrators of this forum, for selecting Mega Man X over Classic Mega Man for DLC inclusion. I'm both shocked and delighted to see that my favorite version made it in, and even though I want to ask why he did in the Axis forum, I can already see why. One, X is pretty much the Superior Mega Man, both story and ability-wise, and the series is the one that is most faithful in the franchise to the original, but also advances it in several ways. Secondl, the X titles started out exclusively on Nintendo consoles, but for the second half/latter three games of the franchise, it became PlayStation-exclusive (barring 4 awkwardly being on the SEGA Saturn as well lol). Plus, it's just a way to jab at Capcom's MvC3 decision to include Zero over and the fan backlash, justified or not, which I can enjoy. XD So yeah, epic roster, I agree with it fully. Great job, guys!

X is the one I honestly have the least memory on lol. That was all Slayer, and I'm not even sure we ever decided X over Classic lol. The sprite he used for a Dev sections thread was X, and the spritesheets for the X games are already up to par (bar rolls and supers and such), so I believe it was X. Plus we might as well be different from Smash!

So there, no need to add a question for him. Essentially it was Slayer's idea/request and that's all you need to know. I may announce other planned characters just to drum up some discussion. There is a certain character whose series I've NEVER played, and Slayer and I agreed he/she would be a good character that reps both PS and Nintendo, and I'm curious as to what moveset he could have. I'd need to see at least fifteen moves before I could even have an IDEA of what to do!

As for that second paragraph…

Ok more PASBR Battles, that should be fun. perhaps we can hold it off a bit and do some Smash 3ds as well?

Count was the obvious choice for sure. he should have been a mod a long time ago. h'll either be very responsible or make it rain fire and brimstone, eithers fine by me. Congrats Bud.

rosters cool. bit sad you can't do the sonic teaser we talked about (well you can but it won't be as good) and i'm actually pretty proud i kept it to myself like i said i would.  X is an Amazing addition. its a bit of a sausage fest though. the most feminine thing in the roster until Samus gets ther (And arguably even after cause Power Suit) is Link. on the plus side, this reveal Gives Marko more material to play with. that'll be a blast.

rule changes are probably Necessary. Sometimes we let arguements run on too long around here.

Oh Marko knew the roster. I let him in on it so that we could do joint reveals at some point (it would've been Sonic if I could've gotten the ball rolling sooner).

We could also do a Smash 3DS tournament when it launches (I'd have to pass since I don't have a 3DS and will not buy one until MM3D).

Happy 2 years at PASTA everybody! =)

How've you been, Slayer?

Congrats on the mod position Count! It's about time haha!

off topic: speaking of PACL things, this usergroup related to it is unused. reason?

I actually meant to remove that. That was gonna be for PACL organizers (Vytrova and Pyro for PSAS) but everybody was busy when we tried setting it up and we never got back to it. Once we get more competitive games (Smash), we'll probably add some PACL Staff

DP wrote:I actually meant to remove that. That was gonna be for PACL organizers (Vytrova and Pyro for PSAS) but everybody was busy when we tried setting it up and we never got back to it. Once we get more competitive games (Smash), we'll probably add some PACL Staff

Do we even have enough competitive Smashers? (not counting me ofc)

Pirate isn't necessarily competitive but he's good. I've never owned a Smash so this could be dangerous once I have the copy to practice.

So technically no but most of us have played a shit ton of Smash before.

I'm a competitive player! D=
Well used to be even better but yeah, I can still go!

I'm pretty well versed in basic tech and whatnot in both Smash and PASBR. So yeah... a few of us are.

Then some of us like me really wanna learn

Well I guess I picked a good day to come out of the shadows. Congrats to everyone who keeps this place alive. I have to say I have very fond memories of this forum- and that speaks volumes about the community that the forum is made up of.

And congrats to Count for (finally) becoming a mod! Pool party at my place 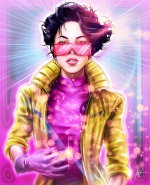 Why thank you. Your Spider-Verse signature looks incredibly dapper.

On another note. Can anyone fill me in on what I missed

To be honest, not all that much. XD We've just been posting regular in the Smash section about Smash news, DP just revealed Axis roster, the daily Anaconda argument provocation, and… yeah. Not much.