Yep, you read that right. TOON Ganondorf. Now, I realize that we aren't even near the development cycle for certain characters just in the first twenty, but I feel the need to make this thread after reflecting a lot on the Zelda series and recently having a reignited passion for the series due to listening to some of Wind Waker HD's music and theorizing about The Legend of Zelda: A Link Between World's story. Now, I initially did contemplate applying for promoting Toon Link, but given the apparent mindset of the Axis team to not really focus on clone-ish characters such as Evil Cole when Neutral Cole was revealed, as well as finally coming to the consensus that I'd prefer Termina Link over Toon Link, I've decided on promoting Toon Ganondorf for the couple of days. I have plenty of realistic perspectives on the moveset's capabilities, source material for content, and why Toon Ganondorf should be represented instead of the more traditional designs included in Super Smash Bros (the Ocarina of Time and Twilight Princess versions), so be prepared for a load of reading lol. But before I do, I'd just like to clarify that I in no way plan for this thread to outright convince the Axis dev team to stop the presses and naively believe that they'll follow my intentions. My main point of this thread though is to at least get the idea of his inclusion to be considered instead of the obvious alternative to have a traditional Ganondorf with a varied moveset that would likely feature him using his sword from Twilight Princess.

Let me just start with explaining why I want to promote this specific version. First off, this is easily my favorite personification of Ganondorf solely because of these cutscenes:

Regardless of whether or not you bothered to watch them, I'm still going to say that these are possibly only some of the very few scenes in the whole series that actually give Ganondorf some actual character and human characteristics besides, "OH, LOOK AT ME, I'M SO EVIIIIIIIIIIIIIIIIIILLLLLLLL", while still being a pure badass (HE PUNCHED A TWELVE YEAR OLD THREE TIMES IN THR FACE IN FULL VIEW FOR THE TRIFORCE). Not to mention his design, which is probably the only design he's had wear he doesn't wear some sort of cliche clothing like armor and with a cape attached. His cloak is simplistic and I think that it would be an absolute shame if we just disregard the Toon artstyle. Considering how that artstyle accompanies six whole games in the entire series, I feel like it would be an injustice if it wasn't represented when we might get additional Zelda characters, regardless of anyone's feelings of about the quality of the Wind Waker of Four Swords trilogy. Here's a pic of Toon Ganondorf if you haven't seen him yet: 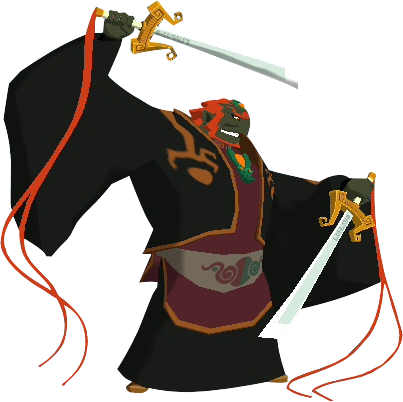 Now that I bring up this image, it manages to lead right into his gameplay possibilities. Obviously, you can notice that he's holding twin swords. Guys. Twin. Swords. Name me one character in Smash Bros who actually has two full-length blades that could accompany most/all of their physical moves. Besides Pit with his dividable bow in Brawl (and even then, they aren't as long as katanas. Not to mention that Pit's moveset is being changed for SSB4), no, there hasn't. Just think of the gameplay possibilities of a Ganondorf with unique sword gameplay from other swordsman, traditional spells and summons, etc, such as being able to parry and form unique combos between light sword attacks and a couple of heavy punch moves (seriously, if Toon Ganondorf is ever in Axis, he needs to be able to do the three punch rush combo that he did to Toon Link in the second cutscene I posted. Seriously).

And that's just a little bit about the physical attacks. We're talking about an evil king with loads of sorcery under his belt, so why just stop there? I can definitely imagine his Triangle attacks encompassing memorable spells and summons. Like that energy volleyball from Ocarina of Time and Twilight Princess, for example. What if that was a horizontal (diagonally downward in midair) attack that you could throw at your opponent (perhaps it can even be deflectable among surfaces or even attacks like Jak's Beam Reflexor, which could lead to plenty of interesting strategies). How about taking a note from Zeus and Sly's substitution tricks, but this time having Phantom Ganon as the copy? I think that would both make sense and lead to pretty good potential. Not to mention having a downward ground punch to the ground that would activate a light shockwave (again, from Ocarina of Time. Considering how Wind Waker and Ocarina of Time Ganon are the same being chronologically, it wouldn't be farfetched to give him these abilities at all). Or, even though it's a stretch, Ganondorf could take a lesson from Heihachi and have an electrical charged state for his swords akin of how Heihachi charges up his fists for some upgraded damage, which would be inspired from Demise's boss battle. Honestly, if we just take inspiration from all of Ganon's appearances, it is definitely possible to make a really nice moveset.

Moving onto the Supers, they were actually quite easy to think up. If there's one advantage to Toon Ganondorf, it's that he REALLY takes advantage of his summoning abilities. His Level 1 could be summoning Phantom Ganon, who then unleashes an aimable energy volleyball, akin to Radec's Level 1 Super.

His Level 2 would be unleashing volley of energy projectiles, inspired by the boss fight segment in Ocarina of Time where you actually have to run away from them because they're that deadly. Think of Sir Dan's level 2.

As for his Level 3, I was temporarily thinking about having Ganondorf ride the Helmaroc King across the battlefield or something, but after some thought I would much rather have Ganondorf take a page from Zeus' level 3 by changing the stage background, as well as transforming into this (and besides that, the Helmaroc King would be better as a stage hazard, anyway):

I'm not going to lie, this is easily one of or my absolute favorite Zelda boss. Excellent difficulty, unexpected twists, intimidating look, longterm battle, and just freaking epic in general. I'm not saying that it would be easy to sprite this sort of thi-Wait, look at what I just found:

At least my vision isn't exaggerated beyond realistic possibility. XD I'm not saying that you can use that exact sprite, but I'm just glad that it's feasible. Anyways, just imagine Ganondorf transforming into this and tearing up the battlefield after a sudden transportation to the interior of Ganon's Tower (which is obviously where you fight Puppet Ganon in Wind Waker). Seriously, I dare anybody to come up with a better level 3 Super for Ganondorf that doesn't involve Puppet Ganon.

And there you have it. All of this is why I'm willing and proud to support Toon Ganondorf's possible inclusion into Project Axis. I know that the roster is far off from this sort of thing, but I only hope that I got some minds rolling about the possibility of including this character. It of course doesn't have to be exactly like I described, but I trust that you catch my drift. Like I said, m only goal with this thread was to help inspire some interest within the Axis dev team to consider using this character in the future, as well as just venting out my creativity. I hope you enjoyed reading, and I'll try to post an actual moveset for Toon Ganondorf in the next few days. Until then, feel free to watch the final boss battle from Wind Waker to give you an idea of how Toon Ganondorf's swordplay would be like.

Lastly, if the Rivalry system is ever introduced, he would be a perfect rival to the King of All Cosmos. Think about it, one of the most well known video game villains who is willing to defy the will of the gods and seeks to take their power versus a god who supposedly created all of existence and can do anything. Not to mention that their both greedy and conceited lol. Imagine, twin katanas versus boxing fists. Don't lie, that's freaking awesome.

So, all that typing, video linking, and source checking for a four word response?

It's not exactly what I expected when you mentioned a toon character idea Lol.

You could have done and write something compelling and forget to post it. Personally, I don't like it because I think Wind Waker was an awful game.

DP wrote:It's not exactly what I expected when you mentioned a toon character idea Lol.

That's exactly how I wanted to surprise you, though.

And that's fine, Anaconda. Still, try to judge Toon Ganondorf for himself rather than what you thought of the game in general.

I know i've said this before but Wind Waker is really the only Zelda game i have any interest in playing (my love of pirates and the open ocean).  I honestly think this has some real potential.

I never would have thought of the idea of Ganondorf fighting the King but now that you've brought it up, i can't believe i never thought of that.  It's works so nicely

I'm glad to see that this delighted you, Marko.

CDi Link: "THAT OLD GANON'S NO MATCH FOR THE KING"

OK, I'm done replying to marko's posts the mention the king with a reference to the CDi games.
in all seriousness though, I'd be fine with King Harkinian/The King being playable.


On Topic: I honestly don't mind what design Ganondorf uses, so long as he has the Ganoncide move in some form.

Now that I've finished Puppeteer, another rival that could be absolutely perfect for Toon Ganondorf would be Kutaro.  I've never played wind waker so i might be completely wrong but i get very similar vibes from toon ganondorf and the Moon Bear King (the main villian of puppeteer)