I once mailed Sony when I was like 10 with the pitch for Deadlocked action figures, and I think I referenced the possibility of making an actual TCG.

They mailed me back a "sorry, but we get too many ideas to consider any one fan idea" letter. And then proceeded to make Ratchet action figures a few years later.

lol I once came up with a Pokemon that looked exactly like Zekrom during Gen 3 during the mid 2000's. Dragon/Electric, red eyes, black skin, and was a legendary. My friends told me it looked too awesome to happen at the time. XD I think that I might still have the drawing somewhere in my attic if I check. So I've sort of been there.

So let's start speculating about the movie itself. So far, Veldin, Quartu, and Kerwan are confirmed from the looks of the trailer. We still have no idea what the desert world is, but for all we know, it could be Veldin during daytime (and it'd make sense since Ratchet doesn't appear to have Clank with him yet).

Also, I'm really curious about what role Dr. Nefarious will play, especially with this being a reboot. Will he show up in a simple cameo like a Supervillain Weekly tv show, or be some sort of secret mastermind or advisor to Drek who inevitably betrays him? Who knows, but I doubt it'd be a small role if Blockade made such a big deal about Armin Shimerman being a part of the cast. At least, I hope.

With Dr. Croid and the Fongoid kid installed, this could go in a million directions. Although they are still relatively minor roles, with the former apparently being a driving instructor now judging by Ratchet's gag at the end.

I'm guessing the desert is Veldin, because several photos from Blockade's sites used Kyzil in the image names. Otherwise, it could go anywhere; I doubt we'll see more than 10 planets though. That means the game will likely have a similar number to CiT, unless they add more in as filler missions (say, like "Go talk to Qwark!" out of the trailer being an entire planet out of the first game, AKA Rilgar). They could even do similar to R&C1 and make a few filler planets like Eudora just to find Qwark/Drek/whoever's wherabouts.

It's beginning to sound like R&C 2015 is within the game canon.

Vitti's comments indicate that it'll be canon, rather than an alternate continuity. With that in mind, it's either gonna have to be a retelling by Qwark or something, or it'll have to fully replace R&C1 in the timeline; the latter would be a LOT of work to ensure no retcons happen (something I'm sure TJ Fixman would do).

Also, Count, you'll like this: There's speculation that Blackwater City may now entail the fight between Qwark and (human) Nefarious as shown in the vidcomics.

And that's pretty cool! I'm just wondering how it'll work though. I take it that human Nefarious will be in the movie then. But then how does he come in contact with Drek or make sense in the overall plot?

Maybe he could just be a quick "joke" villain in only one scene that Qwark defeats in public to exemplify his so-called heroics so that the audience could be slightly convinced of his prowess when R&C arrive to Rilgar (think Rhino from ASM2 or Scarecrow in The Dark Knight). Although things take a turn for the worse when this unintentionally leads to creating the most deadly villain in R&C history.

Oh, sorry. It was supposed to be a link to Vitti's Twitter

As we figured, Insomniac is holding back on Ratchet until SSO is out. Rumor has it they'll have an event for it December 6-7, which is a fantastic birthday present for me (well, a day late but still).

Yay, now I know when your birthday is. XD Can't wait to see the game though, I'm mainly curious as to how the environments will lookand be designed.

i wanna see what characters they put in it.

oh and the guns. guns are fun.

I honestly believe that Insomniac designed the models and environments for the movie, so base it off that. Especially since Insom is collaborating between both studios.

I can understand why they'd do that. They phased the old eyes out for just Clank and his family, and most robots in general. Plus giving him pupils also helps develop him in drama scenes, as opposed to dead eyes.

That face combined with Fixman's hints about changing Drek up a bit has me worried he might be crazy. Which would be a damn shame. I doubt that'll happen though

Bross confirmed he's doing the game. No comment on whether that also means the movie. I'm really glad, because Bross has only gotten better as he's developed with the last three games.

Also, Ali Hillis confirmed she was in the studio a few weeks ago. She voiced Izzy in Fuse, and then took over as Talwyn in ItN because IG liked her so much. This doesn't mean Talwyn is necessarily in the movie or game, since she also did Mrs. Zurkon and an AI in ItN (especially since they brought her back after Fuse! I mean I'd expected them to have cut ties with anybody involved just to avoid discussing that game).

Kevin Michael Richardson has seemingly confirmed on Twitter that he's not returning to do Drek :(

Instead, they seem to be going the Hollywood route as expected. Better him than the main character like in Sly, at least.

Screenshot from the game. Not the movie, the game. 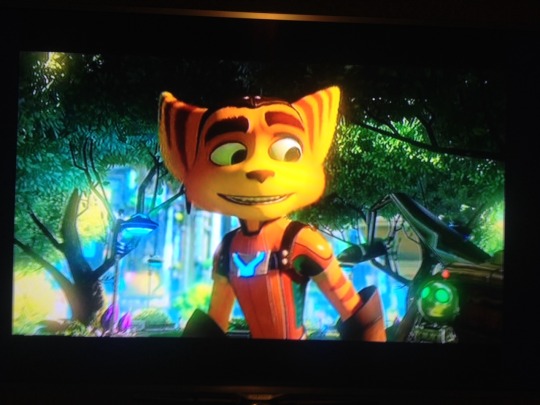 It's blurry, but it looks good. Also, SHINY POLISHED CLANK. Literally my favorite thing about CiT, and they brought it back.

Wow, I was wondering for the past few days when we would get ab update on the movie or gane lol. That pic looks sexy, and Ratchet actually looks like he has his ToD model. Not to mention shiny Clank lol. Can't wait to see some gameplay though!

It's definitely not the ToD model, Count. It's just an up-rezzed ItN with the standard outfit (which, given, is ToD's now). But that's neither here nor there.

I'm a big fan of how Metropolis looks. The backgrounds definitely seem to have eclipsed ItN and A4O for best in the series.

I think this is his best model yet. ItN's was so smooth and felt perfect, but the lighting and new pupils from the PS4/movie model really drive it home.

Sorry, it's just that the fur color has been toned to be more darker than in ItN, the eyes look more detailed, and even the proportions of the head towards the body look a bit more fitting, but then again, I haven't played R&C in months lol. It just looks a bit different somehow, but that is the ItN model.

Holy mother of God. That is fucking beautiful. Everything is so crisp and new but also a callback to the classic games. Weapons from every era, a Megacorp logo, whatever the hell the Pixelizer is, a new Snagglebeast fight.

Having just started to the Ratchet & Clank collection I am so down to see this full game. Really beautiful contrasting this to the first game. All I ask is the return of the protopets because god damn they are adorable.


Also hey, its been a while