I've got the perfect stage. This one is gonna sound really weird, but thanks to the help of Count and being able to talk it out, I think it's pure gold.

Basically, the stage starts out in silent hill, it's all good and creepy, and about halfway through, Ho-Oh flies through the stage, leaving a rainbow and golden 'sparkles' flowing over the stage, changing it into new bark town from Pokemon Gold and Silver.

You're probably thinking 'wtf is wrong with you, Comix?' Well, fun fact and the basis behind this lovely crossover, in Gold and Silver, your starting town, New Bark Town, was originally going to be called 'Silent Hills'! It's literally crying out for this crossover to happen!

What do you guys think?

You know, I've had an idea for this stage for literally weeks, but I couldn't find a way to work out the kinks of the gameplay progression until now. Fellow forumers, I introduce to you...

A Journey into the Past:

For anyone without there who (somehow) doesn't have the slightest clue of what this means, it's a Journey stage that crosses over with Zelda (with the title obviously being a pun on the titles of Journey and The Legend of Zelda: A Link to the Past. However, don't let that latter title's usage convince you about what you're going to read as it's not what you expect). We all know that Journey is an absolutely gorgeous game with a renowned and immersive overworld, hints of civilization littered throughout the main desert trope, and emotions linked to such a short, but grand quest towards the beacon on top of the mountain in the background that you regularly see through the eyes of the robed figure. So what better way to best represent these qualities by having camera-scrolling stage akin to Alden's Tower? Now, I know that people often aren't the biggest fans of these types of stages, but please recognize my reasoning and hear me out with what I'm contributing.

Since the main objective of Journey is heading towards the top of a mountain with a beacon on top, you start at the desert with a bunch of ruins around you. But right then, the red robed figure appears and runs across the background as the screen slowly moves towards the right, prompting you to move. After the camera stops, you come across the base of an enormous mountain, in which shortly afterwards, you see the robed figure come and start hopping across platforms in a vertical manner. The camera starts moving up after some time and then you have to keep climbing the mountain. However, along the way, clouds fill the sky  and it starts to rain. And shortly afterwards, the bottom of the screen starts slowly rising with a flood. When you reach the top, the players have to then jump into the extremely wide and evident beacon (which the robed figure jumps into to hint that you have to go inside). After the flash of light from entering the beacon, you and the other players go through a reimagining of this cutscene (skip to 1:15 of this video and continue watching):

I told you not to think that this was going to connect to A Link to the Past. Yes, this stage will connect with Wind Waker, and honest to God, why not? They're both gorgeous cell-shaded games that have been praised for their unique art-styles and visuals. Additionally, both games hint towards the existence of a thriving civilization in the past that's been replace with these current tropes. Their settings are extreme opposites in both the desert and ocean, but have very similar feelings and immersion whether its sailing across the Great Sea between islands or trekking across miles of sand towards mysterious and ancient structures that provide the most expansive overworlds in all of gaming industry. Lastly, this would be a clever way to work in one of the most iconic locations of Zelda in such an unexpected, but homaging fashion to one of best revelations/moments I've ever witnessed in a Zelda game.

So moving on, the players fall through the sea into Hyrule Castle with the stage finally becoming stagnant without the camera moving in this area. 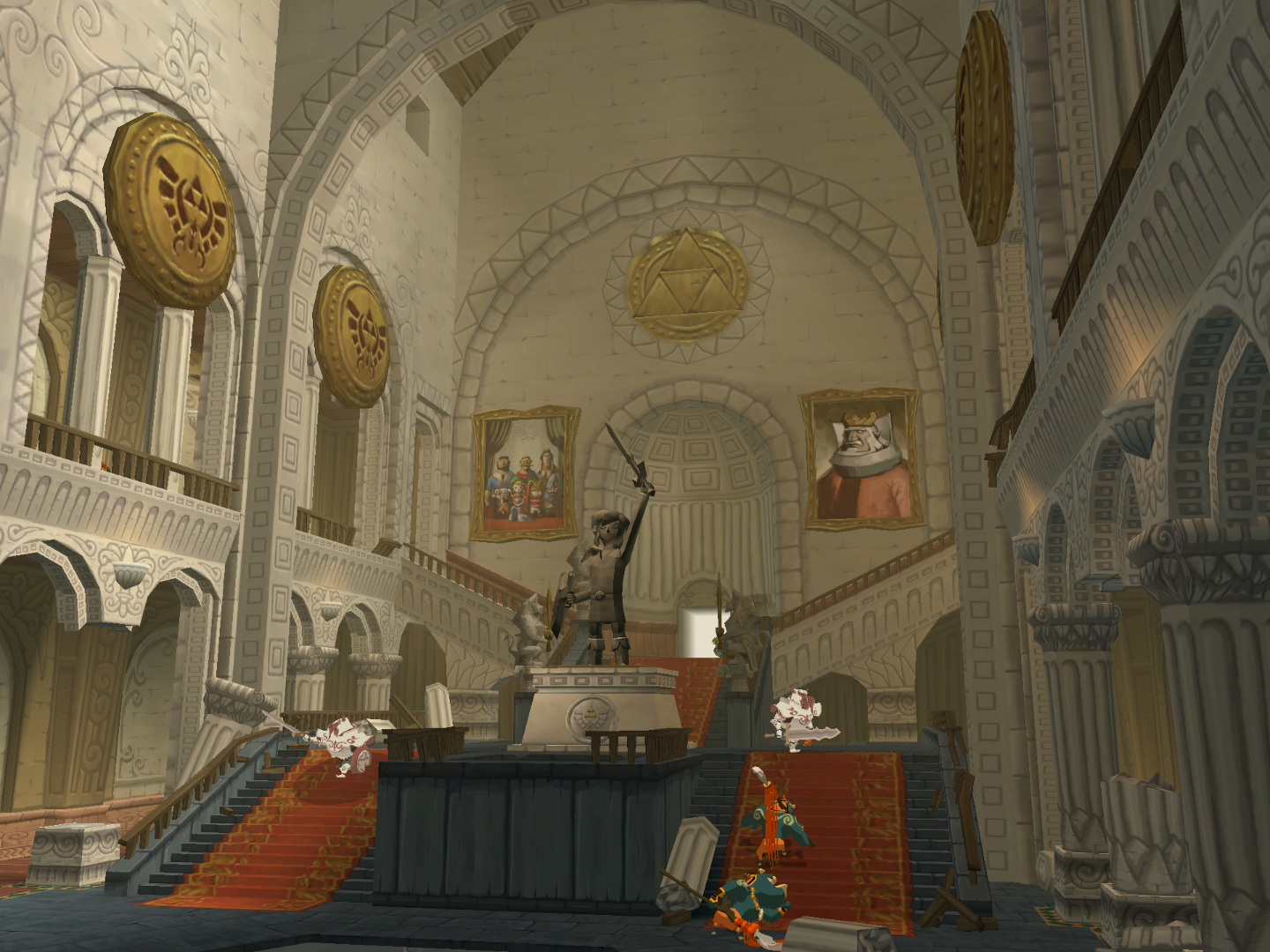 And yes, the enemies in the background will try to be stage hazards with the Moblins throwing their spears or lanterns or the Darknut throwing their swords. But they'll eventually be defeated by the return of the red robed figure who slides across the background to defeat them. And maybe if we want to get cheeky, the red robed figure could restore the color to the castle because it's frozen in time and is witnessed in black and white fashion until you pick up the Master Sword, thus restoring the castle to its former grandeur and peaceful state.

With all of that finally typed down, here are the themes that would play in this level:

So guys, what do you think?

Alright guys, I think that I came up with one of my best stage ideas yet. You know, at least for the people who actually bother to still read this thread or be excited for Axis in general.

I've naturally been in a DK mood as of late and have been toying around with giving DK a unique stage. Naturally, people will point towards a jungle stage being obvious representation, and I'm not going to stray from that idea. However, it's easy to just sprite a an jungle trope level (well, I'm not saying that the spriting in particular is easy lol) and slap DK on it with barely any specific reference to what the franchise has uniquely offered. I was originally going to pitch a Tropical Freeze stage of a frozen jungle, but I think that could be put on hold for what I just came up with.

This is a level from Donkey Kong Country Returns called Palm Tree Groove. It's obviously jungle-themed, but noticeably has the unique aesthetic of having the sunset in the background cast a shadow over the landscape while allowing specific pieces of clothing on Donkey and Diddy's attire to be bright. This is also used in a couple of other worlds in DKCR, which helps make this type of stage represent that installment in general. Of course, with this theme in play, the whole playable cast would need unique colors for this stage (which I am sure is not an easy feat) in a similar manner to the Kongs in the above image. Why might this be cool, you ask? Well, remember All-Stars' opening?

Oh yeah, I'm sure that you all remember this fangasmic trailer. The music, colors, animations, and length astounded us all. Now let me just bring this up. Why can't we draw inspiration from this trailers art-style and adapt it into this stage? It would be both a clever homage and opportunity to be had, and we don't need to scratch out heads over which colors to highlight for the PlayStation characters, at least. And it won't be hard to come up witht he aesthetics for the Nintendo characters either (Mario would obviously have his hat highlighted, Link could have his hair glow blonde, Mewtwo's tail, etc).

As for the mash-up, I haven't completely thought that through yet, but we could go for the Stowaways plane crashing into DK Island/the stage. But if you guys can come up with something better, I'm all ears. I'm mainly focusing on the base stage itself.

Lastly, for the music, Palm Tree Groove is obviously a nice choice, but I think that no one would argue with a classic track like Bramble Blast in a level like this.

So what do you guys think?

That's a really cool stage, count.  This might not be a good mash up but i really want there to be a Snake Eater or Peace Walker stage (always liked those better than the solid snake ones).  Both of these involve heavy jungles.  Maybe that could merge somehow

...I'm going to support that stage just because I now want to hear this theme in a DK stage:

So yeah, let's put a Metal Gear into the background. Or hell, we could even include the Sorrow is you can come up with a good idea for him.