Cause I'm smart.....ill fix it later. REVEL IN THE SUSPENSE.

Now that I typed all that up, that is way past 20. Heck it's passed 40. But this who I expect to make it at least.

The way DP is talking about / has talked about the nonaffiliated characters (not in Smash nor PSAS) make it sound like the game's roster will be built onto in different stages of playability a la Smash Flash or Crusade.

So, I'm thinking the initial 20 (arbitrarily picked number) will look something like this:

For the PSAS half, I tried to pick only 1st party Sony characters, and for Smash, a lot of it's staple characters without double-dipping into different games. Maybe swap out Ice Climbers and Marth for like Donkey Kong or Bowser (here's gaming's mascot's arch enemy, after all).

Piratemankelly wrote:The way DP is talking about / has talked about the nonaffiliated characters (not in Smash nor PSAS) make it sound like the game's roster will be built onto in different stages of playability a la Smash Flash or Crusade.

So, I'm thinking the initial 20 (arbitrarily picked number) will look something like this:

Swap out ice climbers and marth for DK and jigglypuff. That way you have the original smash brothers roster

...you're totally right. i forgot about luigi and yoshi

I was thinking of this roster : 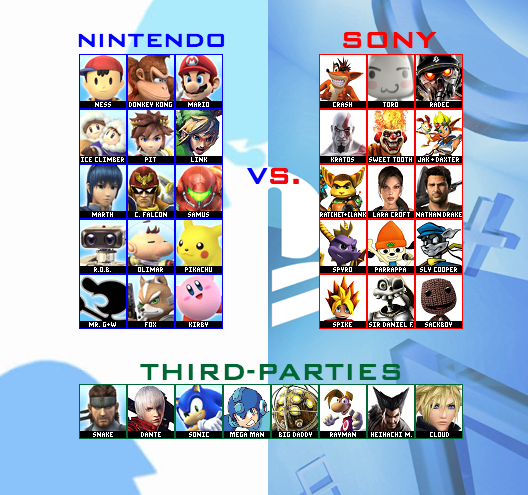 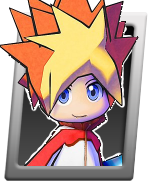 Lack of Sora. That would be a nice roster. Also Lara and Crash and Spyro = Third Party

Other than that that roster is pretty much perfect

BluePikmin11 wrote:I was thinking of this roster :

Well i was gana make a roster but THIS explains alot. let's make this happen

Lack of Mewtwo makes me sad as well.

Where dem coles at (woo woo)

AH HAH! I knew there was something missing from this roster. XD Just switch Crash, Spyro, and Lara to the bottom third-party row like Axel said, add in the Coles and some other character (ETHAN MARS or Kat) and you're gold! Still, nice work! <3

That's one thing we need to change: We only need one Cole.

No we need both. Having him flip moralitys or progress that fast down a bath is innacurate and would reduce his effectiveness whilst increassing the learning curve. good cole is the best 1v1er in the game bar Kat but has the second highest learning curve under Dante. Although they are top tier right now adding that feature ruins both. We need both.

I respectfully disagree. If each series gets one rep, that's biased for inFamous. inFamous, while an awesome game, doesn't deserve more than patriarchs of gaming Mario and Sonic.

Its one rep at launch (and I counted. If we include all the all stars and smash bros with 1 per ip you have to double up somewhere in the smash roster. That's including snake and Raiden s mg on each side and counting yoshi wario and do as their own franchises.) So doubling up ain't a big deal especially since they are both protagonists of the same game.

Nobody is questioning the lack of Cole McGrath?

lol No one likes Cole! D=

BluePikmin11 wrote:I was thinking of this roster :

aw no King either...

I'm actually not sure I put my list of wanted characters here.  All i really need is the King (oh gosh so freaking happy) but i figured i'd type it up anyway.  Crash and the King won't be on here as they've already been confirmed

PLAYSTATION:
Big Boss: He could even be named "Snake" in Axis as that's what most of the people in his games call him anyway but i feel Big Boss would have a much more varied moveset than Solid Snake due to all of the weapons and items you could develop in Peace Walker.

Level 1:  A fulton balloon.  He lunges forward and attaches it to his opponent who then shoots straight upwards and off the screen.

Level 2:  Either the human slingshot or the box tank

Level 3:  Either Metal Gear Zeke or riding on the back on EVA's motorcycle with a machine gun.

Lara Croft: The 2013 Lara Croft could be a very unique character as most of her moveset would comprise of her bow and arrow.  She'd be a green arrow/hawkeye type character

Level 1: Not sure.  Possibly something with her climbing axe

Level 2: When you shoot an arrow at a lantern in the new tomb raider, the lantern falls to the ground and creates a fiery explosion.  This could make a great level 2

Spoiler:
Lara whips out her dual pistols that she acquires near the end of the game and goes to town

Cloud Strife: People wanted a JRPG rep and Cloud is one of the most famous ones.  Maybe RPG elements such as leveling up could be added as well.  As he levels up, his magic attacks get better (going from fire to firaga)

Level 2: Either the Sonic Blade (a fast horizontal charge) or his motorcycle

Level 3: The Omnislash.  Clears the screen

Spyro: Another ps1 legend.  A character that runs on 4 legs could be extremely fun to use.

Level 1: Either a giant fireball or a super charge

Level 2: Control Sparx for a little while.  He shoots projectiles like he did in Year of the Dragon

Level 3: All of Spyro's opponents turn into bouncing sheep which he can then kill with any of his moves

NINTENDO
Tom Nook: In Animal Crossing, Tom Nook is the friendly shopkeeper with a heart of gold.  To fans, he is a ruthless mob boss that oversees everything that happens in the town and beyond.  I've read several theories by fans saying that Tom Nook is actually the one that fund's Smash Brothers.  It would be hysterical if his moveset involved both things from animal crossing and subtle nods to the mafia (such as using a baseball bat)

Level 1: Tom Nook's nephew, Timmy, runs forward a short length and pushes down anyone within reach.  Tom's other nephew, Tommy, then leaps in an arcing direction with a baseball bat, killing anyone he touches

Level 2:  K. K. Slider appears and strikes a chord on his guitar.  This creates a radius similar to toro's level 2.

Level 3:  Tom Nook appears and begins to list off to all of the characters in the match just how far in debt they are to him and how many bells they owe.  Clears the screen.

Simon Belmont:  While I know little about Simon Belmont other than the fact that he uses a whip, I put in on my list just because I knew how much Count Mario wants him.  Since I have no idea what his supers would be, here's a link to Count Mario's moveset.

Little Mac:  Punchout is my favorite NES game.  With all the rumors of him being in Smash U, it got me thinking how he could play.

Level 2: Doc rides around on the bike with little mac running behind him


Well that's what i've got for them.  I hope this helped in some way!  Keep up the great work guys!

Little Mac has all my votes.

So guys, the official roster has been revealed thanks to our one and only DP! What do you guys think? Is there anyone you're glad made it in? Any complaints (I know that I was a bit sad to not see Sir Daniel in, but it's understandable why not…)? Anyways, here's the list:

I advocated Dan over Toro in our preliminary discussion. Slayer eventually convinced me because Toro's an easier sprite, and because he's more memorable from a mascot standpoint. That one came down to the wire, along with Kat vs Sackboy. We chose Sackboy for practically the same reason.

Yeah, I can understand why you had to do that. I can get over Dan not being in, I don't even play as him in All-Stars. I just like his design and the type of underrated niche character he is. XD

I figured I owed Fab an explanation lol. Not fun having to pass over a character beloved by one of our close friends. Nothing definitive here but I would like to give Sir Dan the KotC treatment at some point in the future.

Similar topics
» Can You Name This Game Character
» My Fantage Character - What do you think?
» general of snatchins???
» New section for players to organise Boss fights or to Heal General?
» How do you make your fantage character, your avatar?